The Touch by Lina Hashim, Sort/Hvid

Knocking on wood, avoiding walking under ladders, having a lucky number or carrying a talisman – to engage in superstitious rituals seems to be a universal common, no matter the cultural specificity of the ritual itself, nor the mental health of the person. The performance The Touch by Lina Hashim will bewilder you, questioning what you believe and, more importantly, who you believe and why.

Hashim is a photographer and artist, who deals with Islamic culture, faith and religious practices. In 1992, she fled as a refugee from the Iraqi invasion of Kuwait. Hashim’s sheer presence on stage in the dimly lit black box is captivating. Her womanhood is energetic, elegant, exudes will power, and yet she seems wounded, shaken. Dressed in a dark blue dress, Hashim shares an autobiographical story in the form of a minimalist performance lecture. She tells of five men in her life, of being cursed by a jinn and about her journey into sihr al-aswad (Islamic black magic). The jinn is an integral part of Islamic theology throughout the Muslim world. Like humans, they have free will and can be helpful or evil. The paradox that Hashim exposes is that in Islamic faith you ought to believe in jinns, but summoning them through magic rituals is severely punished by the Islamic clergy and violates their interpretation of the Shari’a. Performing this story on stage and in public thus puts Hashim in great danger.

Hashim stands on a bare, eggshell coloured stage, facing the audience. Complimenting her storytelling, different images are projected onto the stage curtain behind Hashim: pictures taken with her phone of herself and the men she has seen, and other details of the story. She only holds a stack of cue cards, but otherwise speaks freely, quietly, authentically. During the lecture, she keeps holding eye contact with the audience of about fifteen people. Her story begins with her first marriage to D., her face lightens up. However, he soon becomes abusive and together with her two daughters, Hashim flees to a women’s shelter. Her family advises her to see a sahir (sorcerer) to learn whether she has been cursed. This is where the dramaturgy of her story takes a turn. Hashim pauses knowingly and takes a deep breath. After learning about remedies, protective spells and rituals, sorte magier, she sees a sahir and learns about her curse: to never be in love or happy.

Despairingly, and recounting it with a shaking voice, she practices all kinds of different black magic rituals. At the women’s shelter, one night, she draws calligraphy on her neck and spots a moth. Soon after, her daughter wakes up screaming. A message from her sahir on her phone says, “I told you not to perform the ritual with children in the room.” She finds the moth lying dead next to her feet. Baffled, Hashim shakes her head, and reassures the audience that her phone was encrypted and that the sahir could not have known that she had children.

Next, The Touch changes from this mode of “telling” to a mode of “showing”, with Hashim activating an embodied knowledge, her repertoire (to reference Diana Taylor), to make the story come alive differently. On stage, Hashim takes a handheld mirror, leans her head back and carefully draws calligraphy with ink on the right-hand side of her neck. It looks like a difficult position, but she seems well-advanced at mastering it elegantly.

Hashim’s story intensifies and she recounts traumatic encounters, which are not easy to digest for the audience. The atmosphere in the theatre space thickens and is electric when she recounts her travel to China, where a blind woman practices a ritual on her with a dagger. Back in Denmark, she goes to Holbæk and sees a sahir, who performs a ritual on her, demanding some of her pubic hair, eyelashes and hair from her armpits. She has to walk over smoke in order for it to enter her abdomen, and afterwards, she must be penetrated by the sahir. He abuses her in an uncomfortable way and in so doing, jeopardizes the ritual.

Hashim does not end her story with a conclusion or happy ending, after all this is an autobiographical story and she stands calmly in the flesh before her audience, just two metres away. She shares her future plans: to complete the jeopardized ritual in Iran, where black magic is forbidden and punished with death. Westerners often seek to place something inexplicable, like Hashim’s story, in an understandable, dissectible and rationale context. Questioning the validity of her story does not spring to my mind, but in hindsight, I imagine it must have for other people in the audience. Is this real or is she simply telling a good story? Questioning Hashim’s integrity on stage, while sharing her trauma and abuse, also resonates deeply with the #metoo movement. On the one hand, I make this connection because of the abuse Hashim is subjected to by men she loves, and the abuse she subjects herself to in order to have the curse removed from her. On the other, because of The Touch’s dramaturgical means of combining visual archival documents (projected images) and a woman’s body as a living, breathing, performing archive in and of itself. This twofold approach ultimately confronts audiences with the ethics at stake, when believing in what we cannot see as well as believing her, from a feminist principle, on and off stage.

After finishing her overwhelming personal story, Hashim opens the stage curtain behind her, inviting the audience to encircle a dark lit space in the shape of a pentagram, framed by floral, wooden sculptures. The five photographs show the artist herself through different glimpses of her body. This second part of the performance creates a different, sexualised energy imbued with melancholy. The performance space is filled with some kind of incense; sweet wads of smoke hang in the air. They dance, too. Loud, visceral bass music is playing from speakers, filling the space with beat, female voices, filling my body with vibrations. Hashim dances. She dances not for the audience; she dances for herself, for her fate, with and against the jinn. Watching her is intense, and despite the bass, I forget all about having a body, I am entering into some other, spiritual space. Lit in golden waves of light from above, Hashim gives her all to the dance, she turns her head around in ecstasy, reminding me of the Dervish, but putting so much more female power, almost vengeance into it. The movement’s sensuality and address is directed to a world beyond.

The music fades, and Hashim invites the audience into the third part of the performance, into an black box exhibition space, before leaving the room. On the opposite wall you see a lush red Persian carpet, from which spring blood-stained, thickly layered, bright red strands of wool. From afar, it seems as the carpet is somewhat symbolizing a woman’s body, menstruating, leaking, bleeding. There is no vulnerability in it, but more so, a beautiful, life-giving power. In addition, there are around twelve exhibits, each one carefully installed onto a pentagram-shaped black pillar, and lit with a string of an almost hollow, smoky light cone. They look enigmatic and draw the audience in like moths. From close-up, you can see e.g. an exhibit of tiny, fragile, and half broken eggshells with imprinted red calligraphy – parts of a black magic ritual that Hashim told about. You can also see the dead moth, Hashim’s iPhone, diary, letters from Danish health services about her mental diagnosis, and different tools for dark magic, including pearl powder and her pubic hair. I cannot help but wonder, whether looking at these objects opens up another layer of the story, or actually closes it. They meticulously dissect her story in a forensic aesthetic. I feel as if I am thrown back into my Christian, Western socialization, looking at the seemingly “necessary” evidence to make Hashim’s story believable, showing that we as audience really ought to believe her, beyond the theatre stage – also assuming that we didn’t entirely without the tangible “proof”.

Digging into more sources about Islamic occult, I stumble over works by the anthropologist Alireya Doostdar, in which she compares the disciplinary, professed knowledge, the occult and that practiced in academic research. She asks how we can adequately appreciate virtues and judge whether they are adequately realised, when we are actually outsiders to their tradition, when we are far from being initiated into the relevant practice (not just the Islamic occult). In short: we ought to recognize our shortcomings, in order to learn or “even to create something new” (quoted from “Impossible occultists: Practice and participation in an Islamic tradition”, American Ethnologist 46(2), 2019, 188)

There is something highly evocative in Hashim’s performance. It plays with the Western gaze and its shortcomings, and the perilous wrestling with the simple call to “believe her”. The minimalist storytelling by Hashim turns audiences into witnesses of the perilous danger she has put herself in prior, and presently, with this public performance of The Touch.

Experiencing Hashim’s dance makes audiences first leave that word-heavy story and enter their own bodies, before eventually experiencing a spiritual transgression. The three-fold dramaturgy of The Touch moves from a minimalist autobiographical lecture, towards the ecstatic dance – making the audience forget all about words and semiotics, reason and rational causality, before finally employing a forensic aesthetic of the exhibited objects, the “evidence” that seem to make the inexplicable story legitimate and believable, for judging, dissecting, Western audience gazes. The Touch is neither about the age-old theatre issue to distinguish fiction from fact, nor is it really a story about men, women and love. Rather, Hashim puts centre stage human’s desperate attempts at changing the course of history, of finding agency to turn their wheel of fortune. The Touch is about our human desire for meaning-making, where we can find no causal relations – no matter the faith. The Touch is about knowing and not giving up on yourself, as shown in Hashim’s enduring fight of her curse and fate, in pursuit of a different end to her story.

Gratitude to Anders Thure Djurslev for helping me with an English translation of Hashim’s lecture. 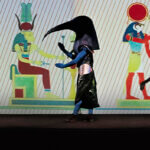 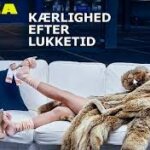 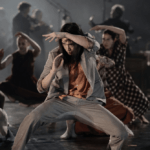